I've seen a few other posts with suggestions on how to use a DD-WRT (v3.0) with my FTTC connection in bridge mode but I've been unsuccessful.  I've previously used the same router with TPG FTTB, but never needed to do anything in the VLAN area.

Hardware wise, I have the NBN NTC into the Linksys Router's (Running DD-WRT) WAN port, relocated from the Archer router.

DD-WRT Config
The basic setup is set to use PPPoE (username removed in screenshot for privacy). 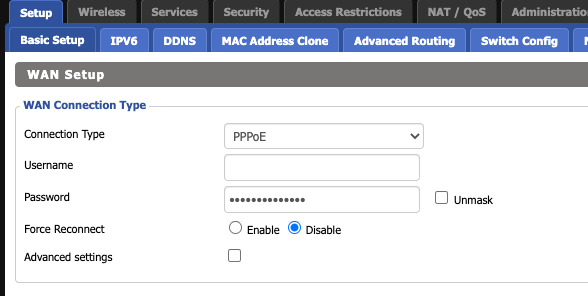 Under Switch Config, I've set the VLAN to what I think was suggested 2 for W and 1 for the other ports.  I did assign to bridge "LAN" but this keep going back to "None" when applied/saved.

Checking the LAN status, the link refuses to come up.

Any tips on where I'm going wrong?

Hi @Madjock . The DD-WRT wiki describes vlan1 (containing the 4 LAN ports and the internal wifi port) and vlan2 (containing the WAN port). There's no indication that vlan2 implies a VLAN ID of 2. VLAN ID can have a value up to 4096. So where is that value set?

The wiki says there can be up to 5 vlans: each LAN port on its own vlan and the WAN vlan. To allow data to pass between each vlan, there is an internal port which must be added to each vlan.

It's unclear whether the bridge from the wifi to vlan1 needs to be defined or is just there.

Thanks for replying, just wanting to get this right in my head.

The W port is the WAN Port on the back of the router, where the NTD/FTTC connection lies, I have this on VLAN which I have selected as 2.

The rest of my internal network is on VLAN 1, both Wireless and the Ethernet Ports 1 to 4.

I’m missing something in the bridging area to connect these up, any ideas?

@Madjock . Initially, I thought you had a problem getting the WAN connection to internet running. I realise now that the W port has green status so the WAN connection must be ok. It must have worked out the VLAN ID value from the datastream.

When you say "bridge mode", I think that is a description of the internal management of the router. DDWRT is making the router behave in standard DHCP mode.

What model router are you using with DDWRT? There might be some variations for this model.

I'll look further at the wiki.

Hi David,
It's a Linksys WRT1900ACS v2, I was also wondering about MAC address cloning of the NTD but looking at other guides it was rarely mentioned as a requirement in this scenario.

@Madjock . I did a search on the wiki using: vlan AND tagging AND linksys AND wrt1900. It returns 1 article with some commands to setup switch0.

Don't know if this is the same thing as making the internal ethernet port common to each vlan.

PS. Whole project seems a bit of a hodge-podge; doesn't seem to be any formal documentation on parameters.