Wi-Fi performance. Is it time for a new modem?

I have been with TPG in West Melbourne since 2012. Over the past month roughly I have seen a massive drop off in my performance with speed tests showing just 0.80mbps at times. My epected speed is 5.8mbps.

The thing is when I change the channel on my modem from say channel 6 to channel 1 it seems to fix the speed issue but only for a small amount of time. I learned how to change the Channel and bandwidth by calling TPG asistance. The operator on the phone walked me through it and explained that this could help.

And before you ask, the modem is in the centre of the house and I live in a small 2 bedroom unit. I don't have laptops open running anti virus software.I have a custom password that we have not shared with anyone. It's just my wife and I and our android phones and we can't even load twitter and instagram properly let alone stream Netflix or Youtube consistantly.

Surely Modem technology has progressed significantly since 2012 and as a loyal long serving customer it must be time for a new one?

Here are some screenshots of speedtests I've done. For some reason they havn't uploaded in order but it gives you a glimpse of what we're dealing with.

Note the speed performed best soon after I changed channels or bandwidth each time. 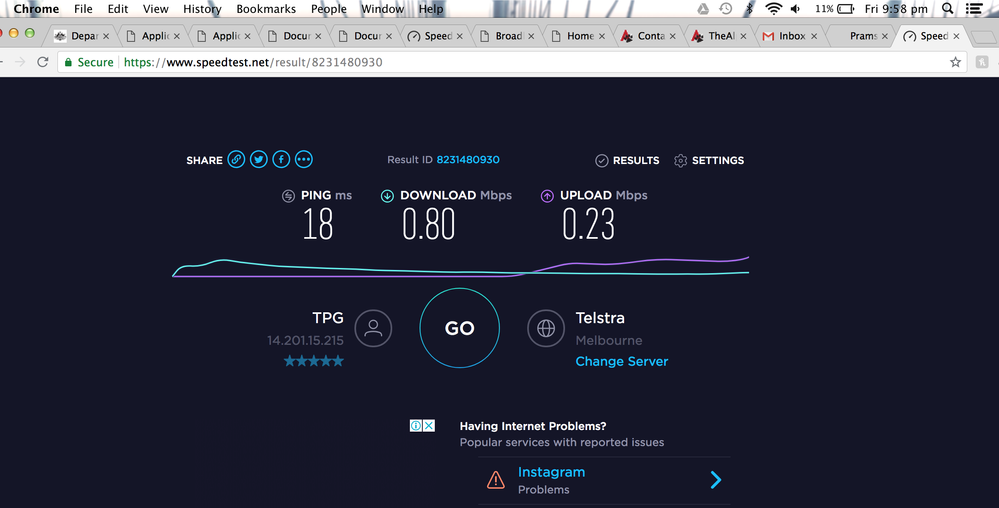 We tried to locate your account using your community details to no avail.

We'd like to look into it to understand the situation. Please shoot me a private message with your TPG username or customer ID number.

Thanks Basil I've just messaged you.

Thank you for sending the details via PM @ElliotSt.

I've responded to it and will provide you with updates once available.