I am on the Superfast HFC 100/40 Plan and I noticed today my Uploads have been cut to 20mbps.

I was not even notified in any way of this change, and am not happy at all.

I am under the impression the 100/20 is the only plan available for new customers, but this should not affect existing customers.

I had an email notification from Shane (Moderator) to send him a PM in the previous thread but unable to do so now since it has been deleted.

Yep in the same boat mate and was posting in that deleted thread too. Wonder why they deleted it? Dont want more consumers being educated of the fact that they preordered the 100/40 Speed NBN but are now on the 100/20 speed with zero communication from TPG.

If anyones having a similar problem after signing for a 100/40 contract, dont let them make you run around jumping through hoops and waste a week diagnosing the problem. If your Upload speed is still 85~Mbps and you arent getting any dropouts and its just your Upload speed thats now gone from 37~Mbps to 18~Mbps then tell them to put you on the right plan.

Here is the information from the NBN Technician that came to my place today to confirm the suspicions and clearly tell me that they are capable of providing me 100/40 speeds however my service provider is limiting me to 25-100/5-20.

I am waiting on a call back from the TPG escalation team, hoping this is a simple resolusion as the only answer I will be accepting is "Sorry we made a mistake, you are now back to 100/40" or I will be filing with the ACCC for a clear bait and switch on the 100/40 contract that I preordered more than a month before June 18th when you updated the speeds to 100/20. I was even recieving Upload speeds of 37Mbps for weeks so its pretty obvious I was on the 100/40 plan, just not anymore for some unknown reason. 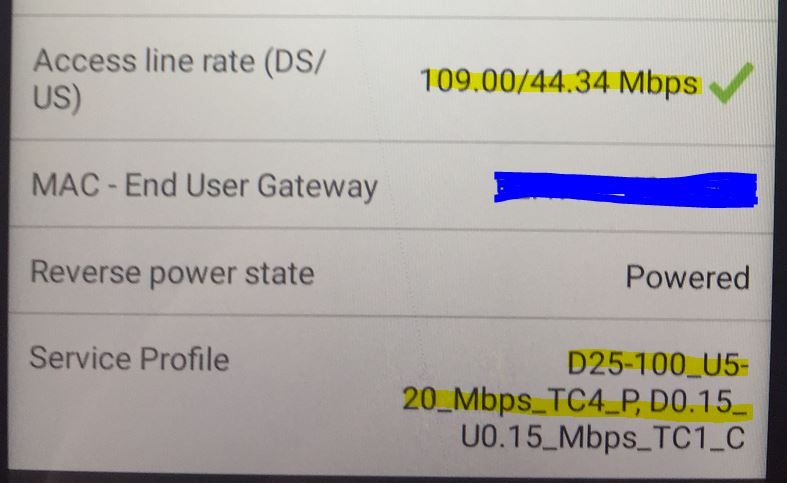 Level 3
I am prepared to go to the ACCC also. But will wait and see what TPG come back with first.
1 Like
Reply
Highlighted

So was just called up by the escalation team and they were very adamant about only being able to offer 100/20 speeds for both new and exisitng constumers and that they could no longer give me 100/40 and all they could do for me is end the contract without fees.

I will be making a complaint to the Telecommunications Industry Ombudsman for these slimey practises of changing existing contracts. I would say this sort of bait and switch activity disgusts me but I should have come to expect such things from the telecommunications industry. I should of gone with Launtel who are still offering 100/40 to residential areas today.

Level 1b
Yep, I'm in the same boat. Noticed today that upload speed is down to 20. Disappointed
1 Like
Reply
Highlighted

Its actually ridiculous, they claim that residential areas do not need upload speeds of up to 40Mbps so they are going to reduce all residential plans to 20Mbps. So far this seems to include existing plans as well as we have been affected.

In a time during quarantine with a large number of people working from home, we need higher residential upload speeds more than ever.

I just called TPG Helpdesk, spoke to someone in Tech Support who then handballed me to Accounts, who i could barely hear due to their awful mobile connection, and asked to be put thru to a supervisor, who had an even less understanding of my issue and a terrible mobile connection also.

I asked for my previous plan of 100/40 to be reinstated and they were going to put me back on 50/20 when i told them to not touch anything at all and put me through to someone higher again so I ended up in the escalations dept.

Finally! Someone who could understand the issue, she said she will put the request thru and it should take 24 hrs to kick in!

TPG Support has gone down the toilet over the last few months.

Please let me know if you get your upload speed back. I am still struggling to talk to the right people who will put me back on the 100/40 plan. I have been told by 3 different people that they are putting all existing and new customers onto the 100/20 plan in a slow rollout and that I cant get 100/40 anymore and these nothing I can do.