Same issue here in Cairns on NBN 50. What is going on??

Cremorne NSW NBN50 is having significant problems with upload since everyone started working from home. Yesterday was the first day here I tried working from home and my speeds for download were stable at about 47MB/s, while the upload hovered between 2-3 MB/s - painfully slow and useless for VPN, remote desktop and MSFT Teams.

I spent an hour to tech support after 5pm and went through all matter of tests switching off and resetting HFC modem, Orbi routers, isolating devices on the network and eventually bitdefender's firewall and tweaking some settings improved it a bit and it was hovering around 8MB/s. By 8pm the upload was back up to 18MB/s.

Now starting a new work day from home the upload speed is back down to an attrocious 8MB/s, while downloads are still good at 47MB/s. What is wrong with the network is there not enough upload bandwidth from TPG? beacuse the current uploads speeds are useless. These upload speeds are making the NBN connection unusable and it certainly seems to be related to traffic and a lack of capacity on the Cremorne NSW exchange.

Screenshot of speeds today during work time and one from last night.

Friends also in Cremorne but with AussieBB have a 100MB/s connection are averaging 8MB/s upload through the day, this sounds like an issue with NBNs Cremorne HFC itself. Looks like there are some serious capacity issues.

How can I get more upload speed?

Hi Will, I am having the exact same problem as those above. I have investigated the router settings (a TPG supplied Archer VR1600v) and removed the manual upload speed throttling that had been enabled for some reason.

Unfortunately I am still receiving upload speeds of well below 1MBPS.

My download speeds are okay,but the upload speed has never been higher than this.

Can you offer assistance? 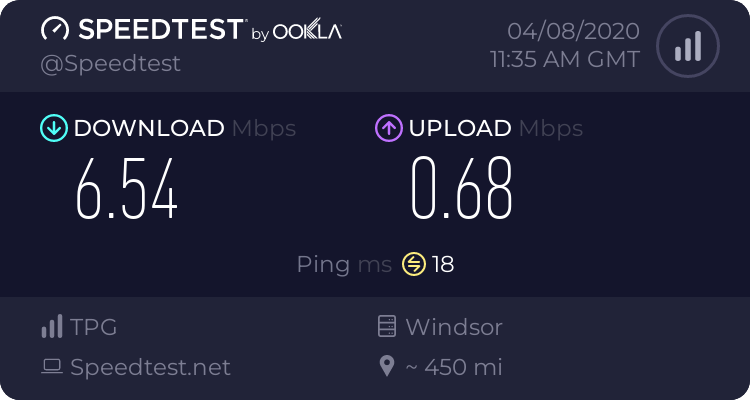 I tried chat, but Justine became unresponsive. Tried to call but 60min wait

Is there any way to reset my connection or to tweak speed? 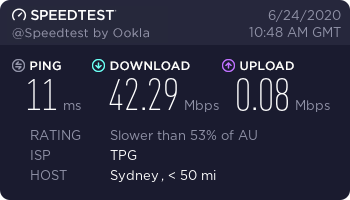 Welcome to the community!

Thanks for raising this to us. What troubleshooting have you done so far? Please send me your account details (Username/Customer ID together with the address on file).

In case you need a reference: How do I private message (PM) in the community.

In the event that you experience dropouts on wireless devices this could be caused by Wireless Interference.

Same issue here. Extremely slow internet upload speeds and I'm on the NBN FTTN Superfast. This is time-precious work for clients, I have been waiting 2 days to deliver a 5gb file!

Not impressed and don't want to waste my evening on hold on the phone!

Please tell me how I should proceed.